back to main   back to current  Installation view of a May 2013 exhibit in a Grant Park, Atlanta, GA neighborhood center
called the Culture Club whose mission is to provide an art, music, performance center for isolated elderly folks and youth.
The photos start in the NE corner & go around the room. Twenty paintings from the 1980s. In the left corner
is an old toy tractor or rocket. The abstract painting was left by a previous tenant. 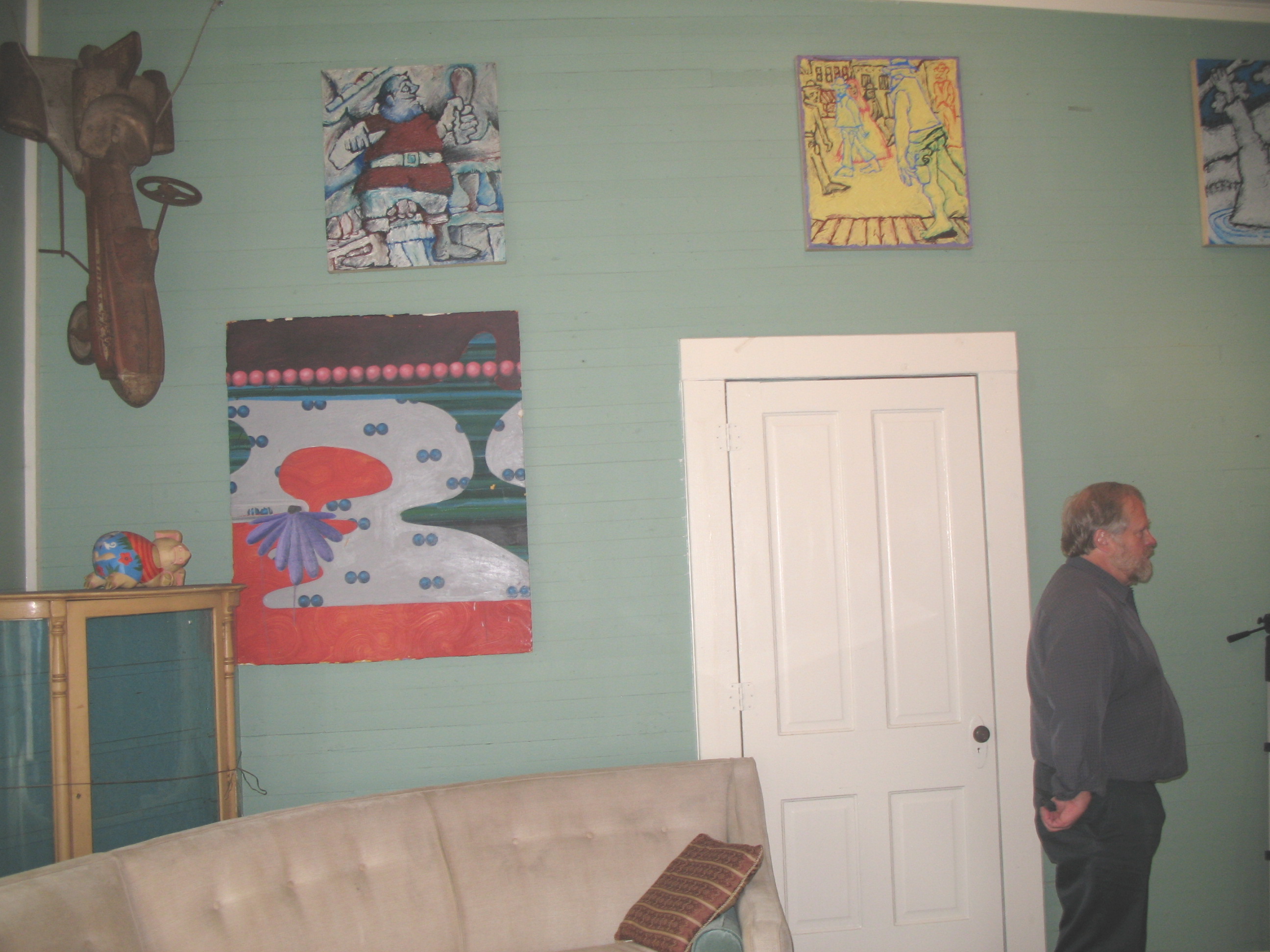 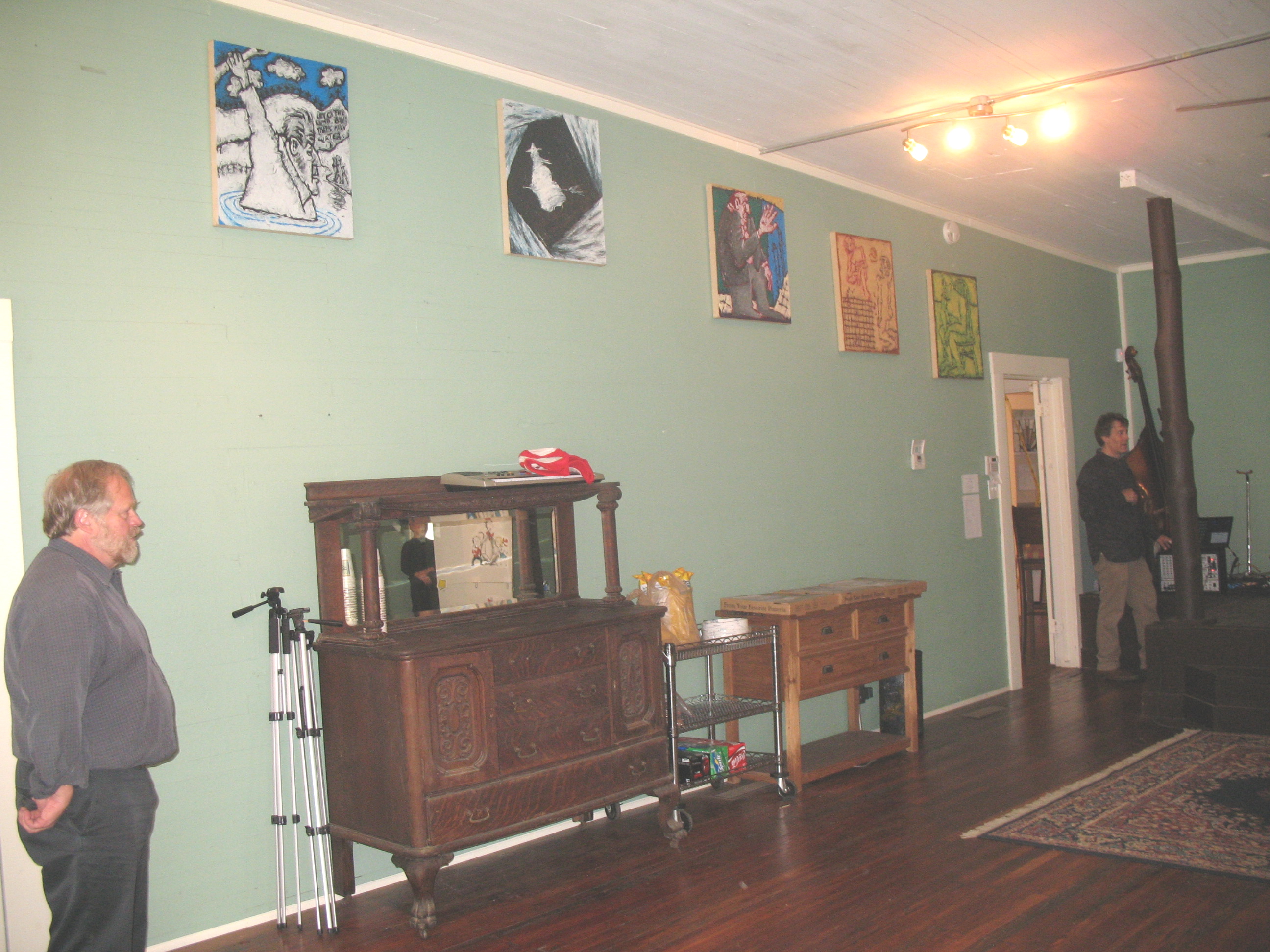 The photos were taken just before the reception. An early arrival to the left and Doug Lueder
on the right, the owner and creator of the center, located in an old neighorhood storefront. 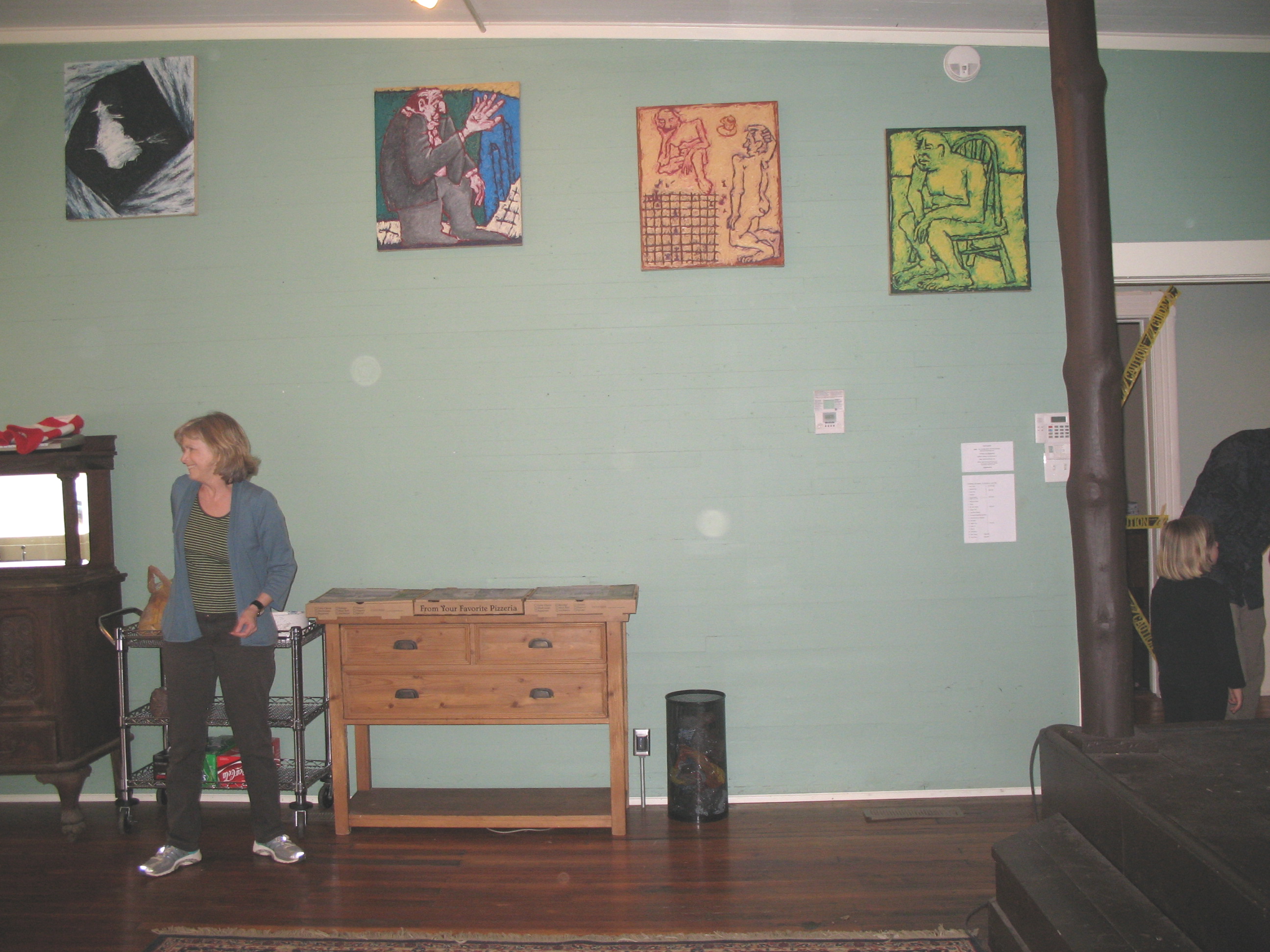 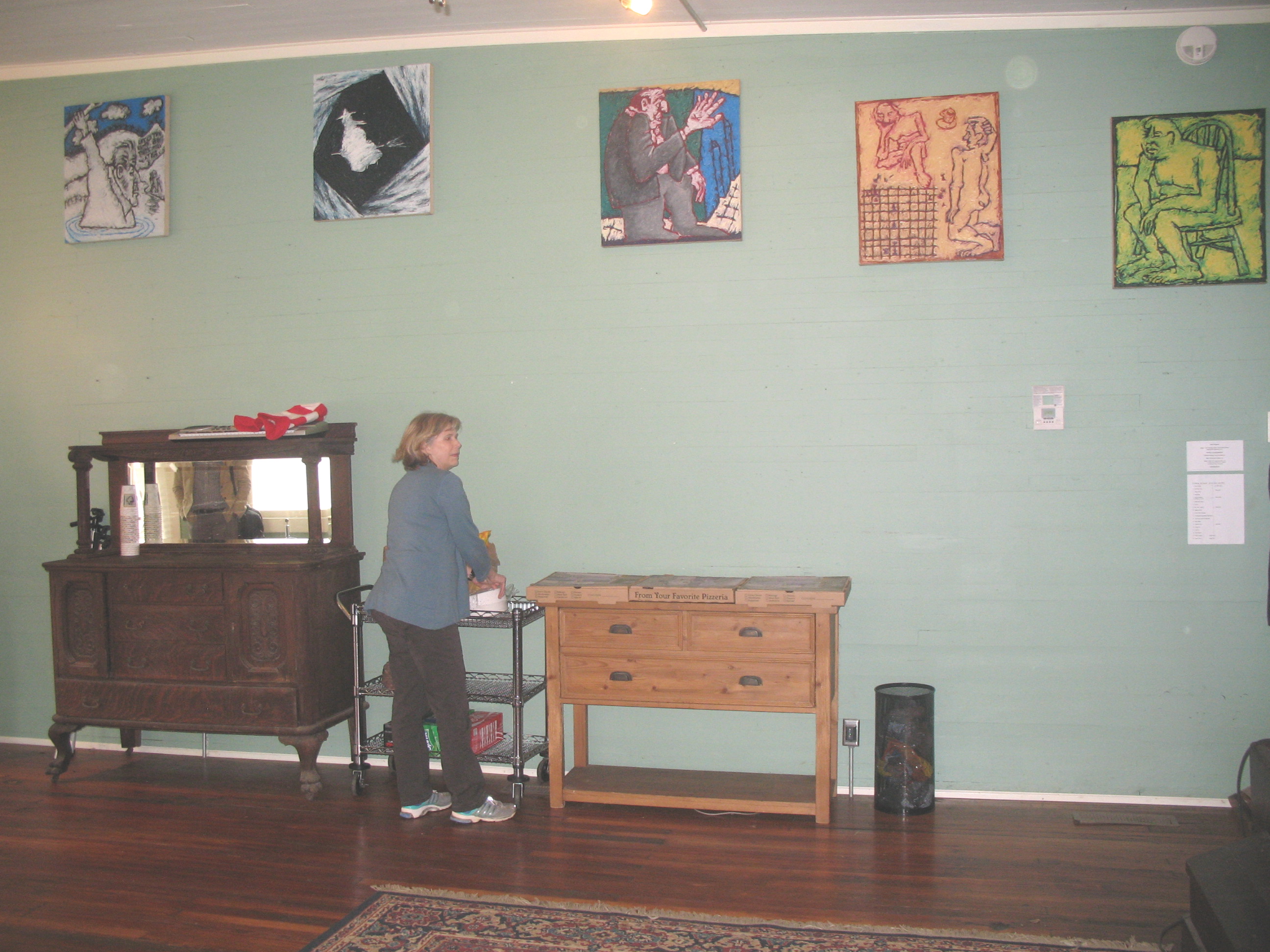 On the south end of the room is a stage where I performed original songs to a chatting crowd
of adults and their children, running into and out of the room with voices and behavior pitched
at level "wild". After about 8 songs Chris & Jeremy joined me for a jam, Cyndia showed up
but before she could get going some of the kids took over the drums and it became impossible
to play - unless you're into avant garde dissonance. The Paintings Paul Cezanne and
Senor Goya flank the doorway. 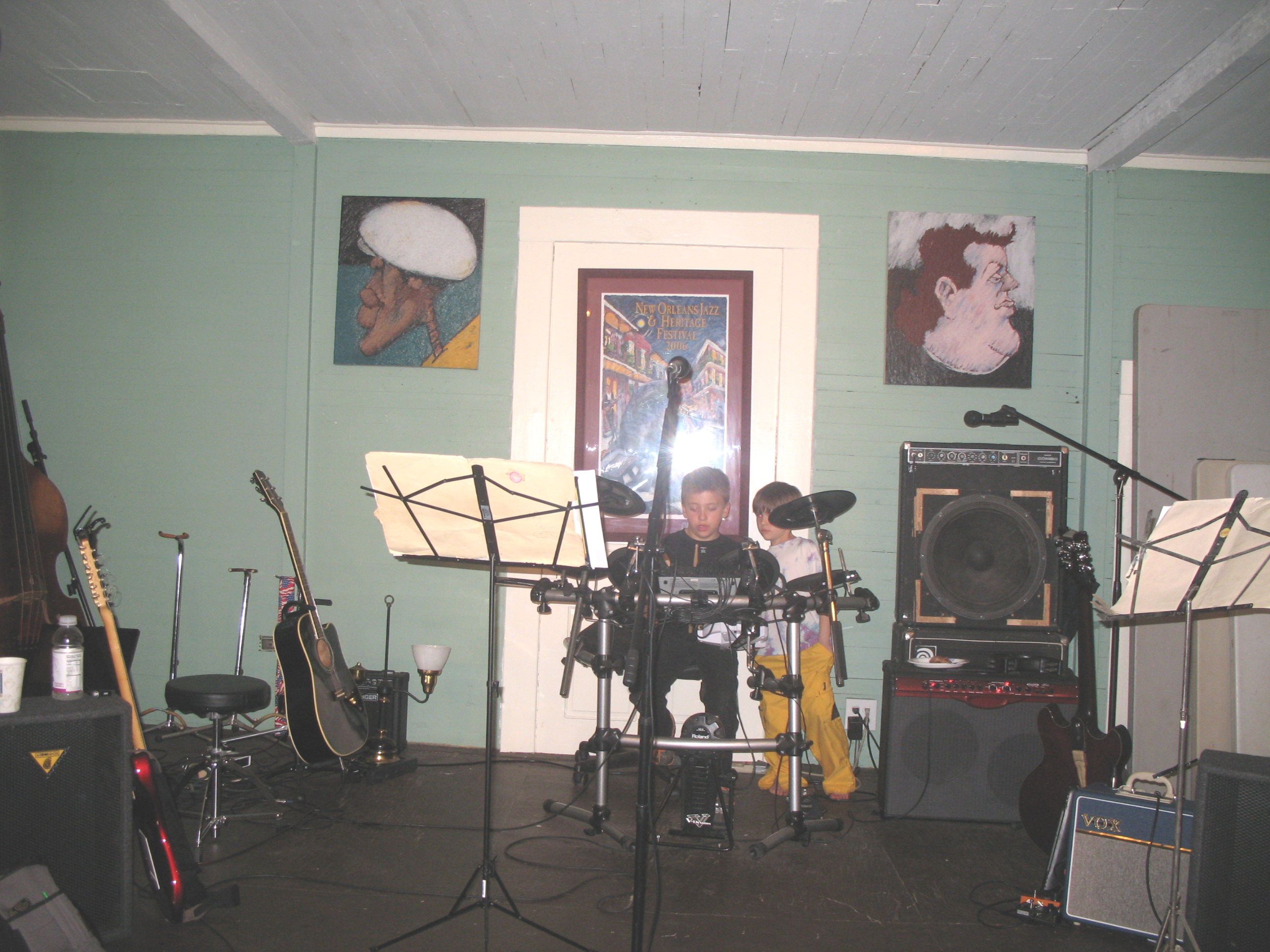 Dairy Atoms on the left, Another Cup on the right, from a varied series I did of cups. Props from
the first performance of the evening below left, of a very entertaining troupe of kids led by Nia. 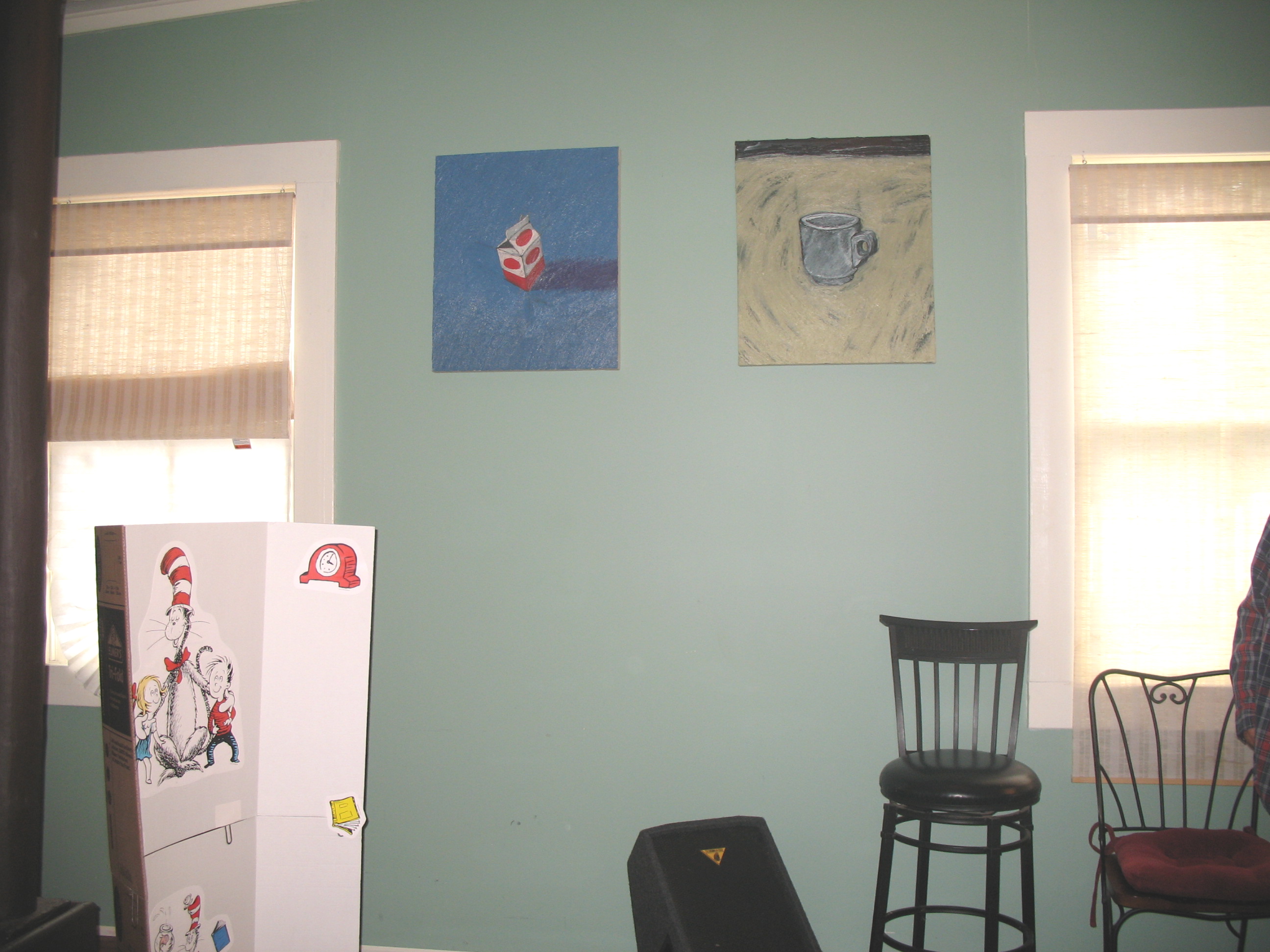 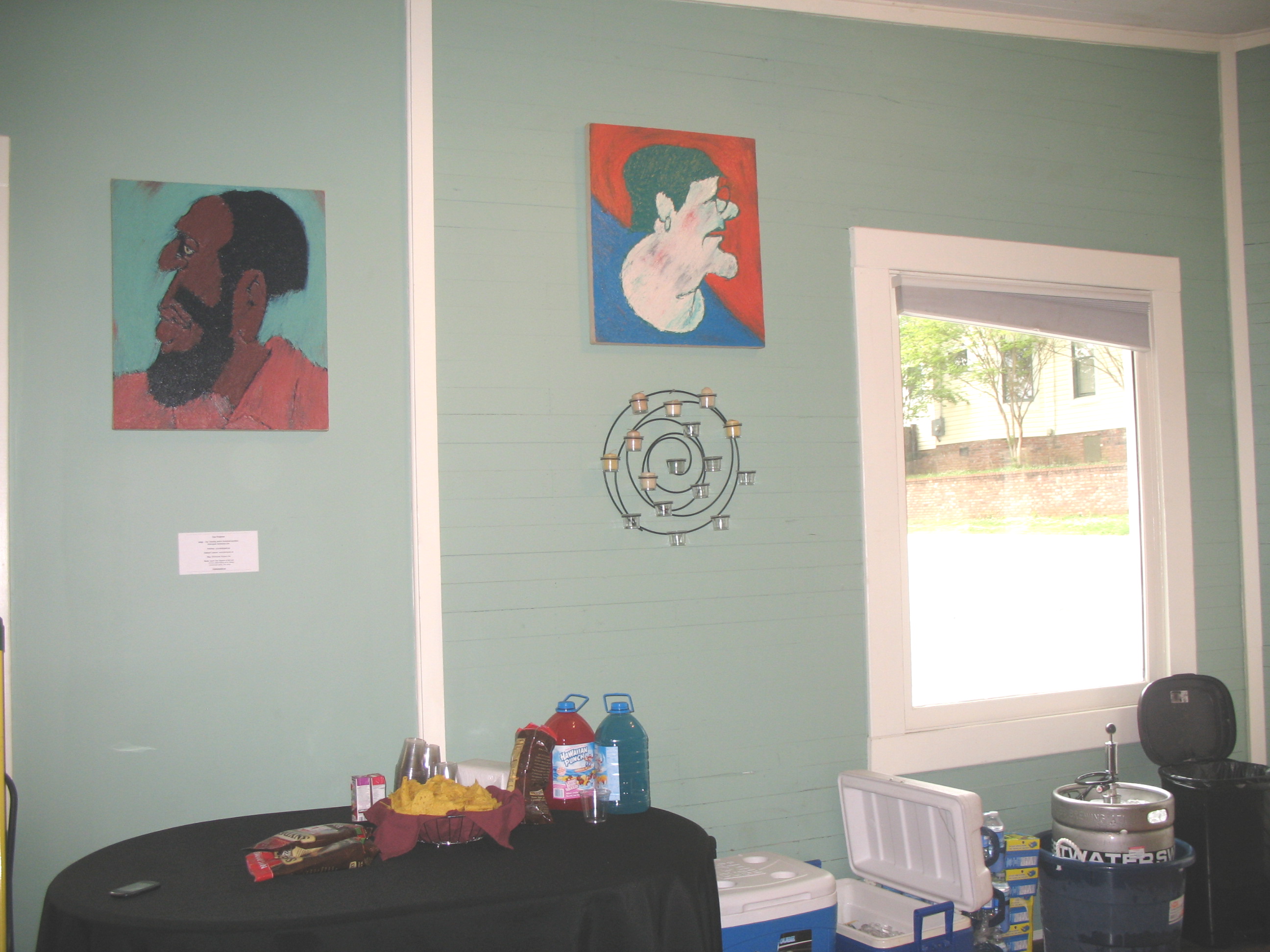 Jesus Christ & Pedestrian on the west wall. I often used titles to play around with received wisdom. 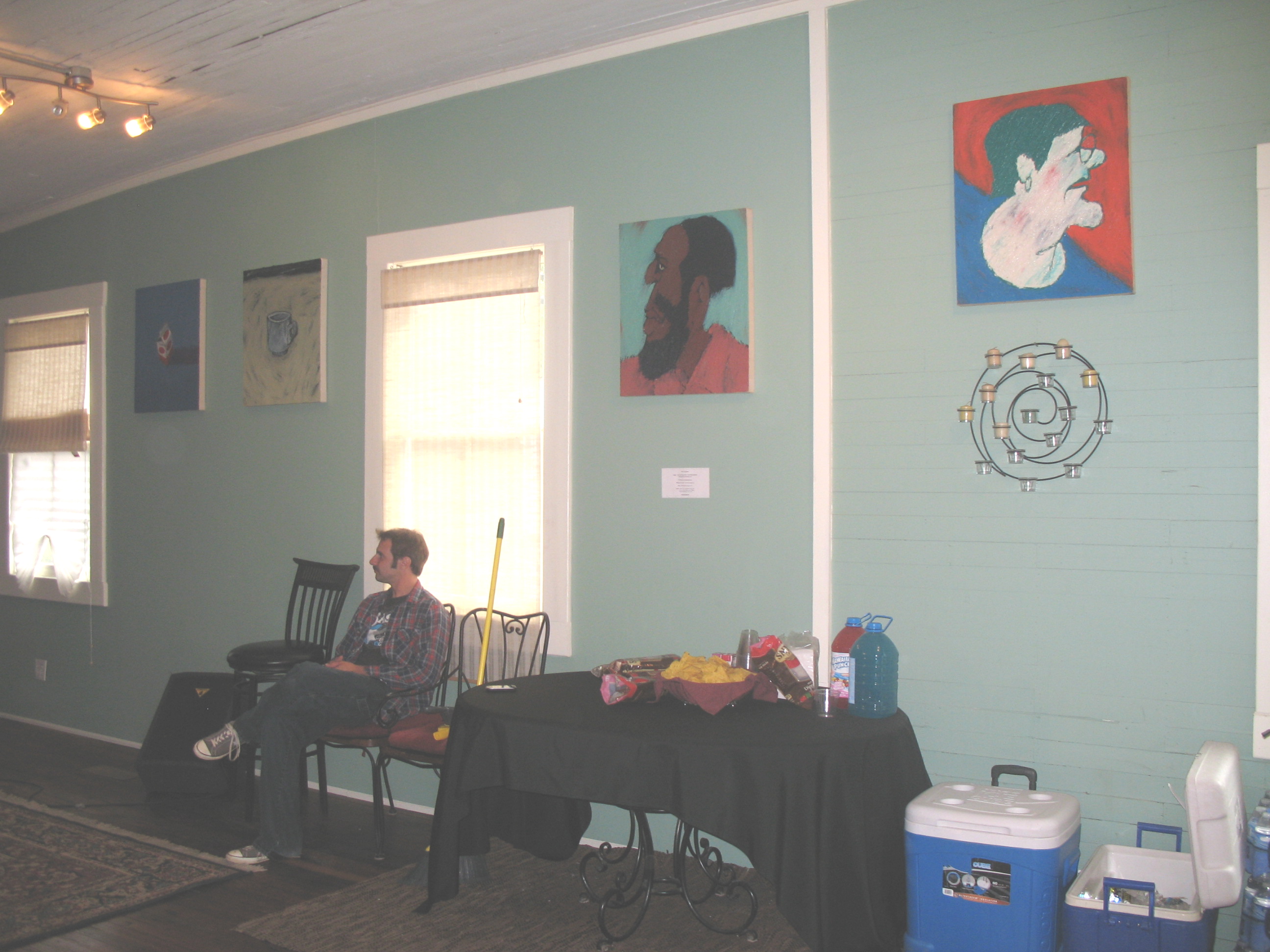 Very dark pics of heads from mid 80s. Better views of them can be had under the Heads category. 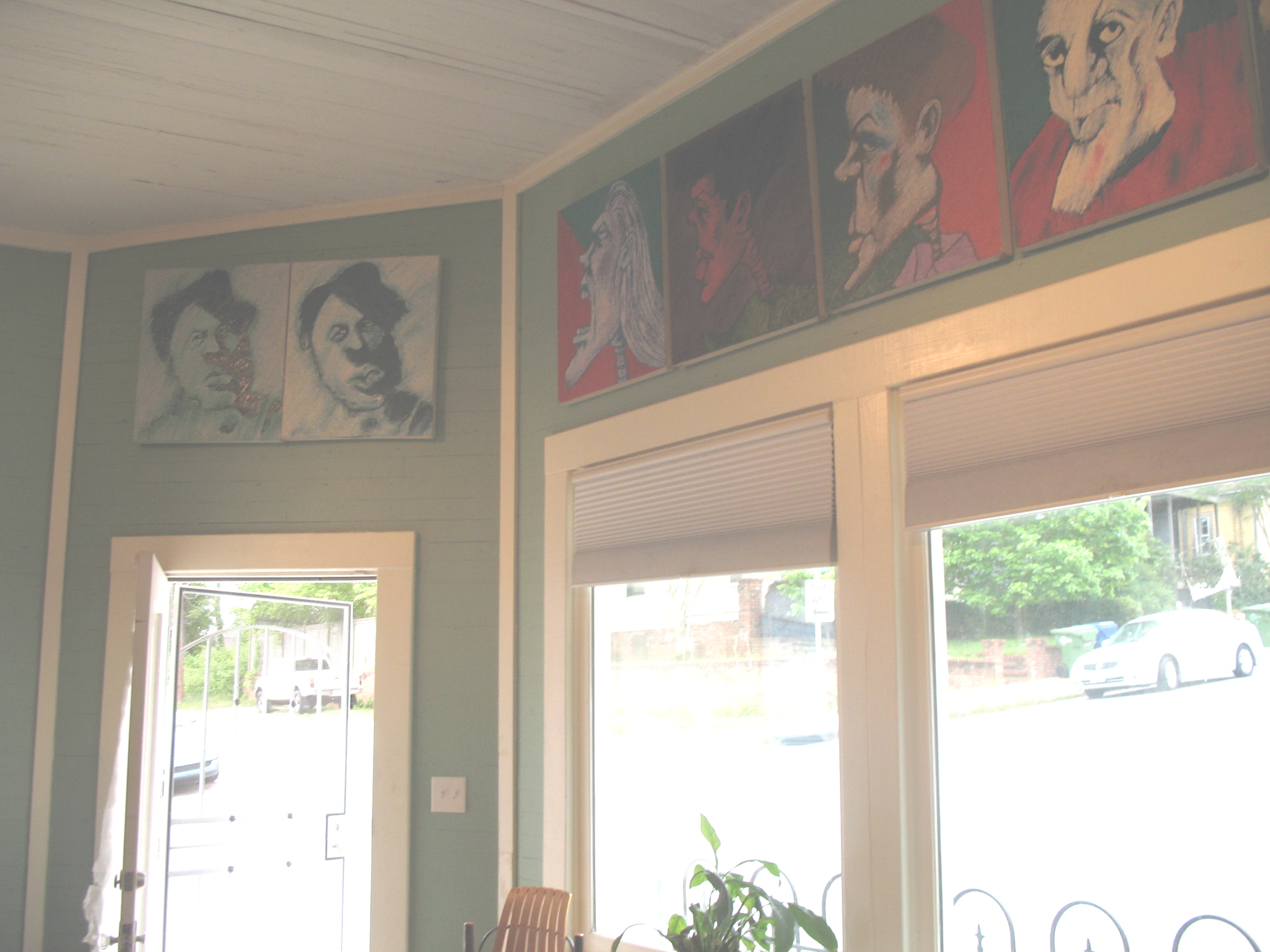 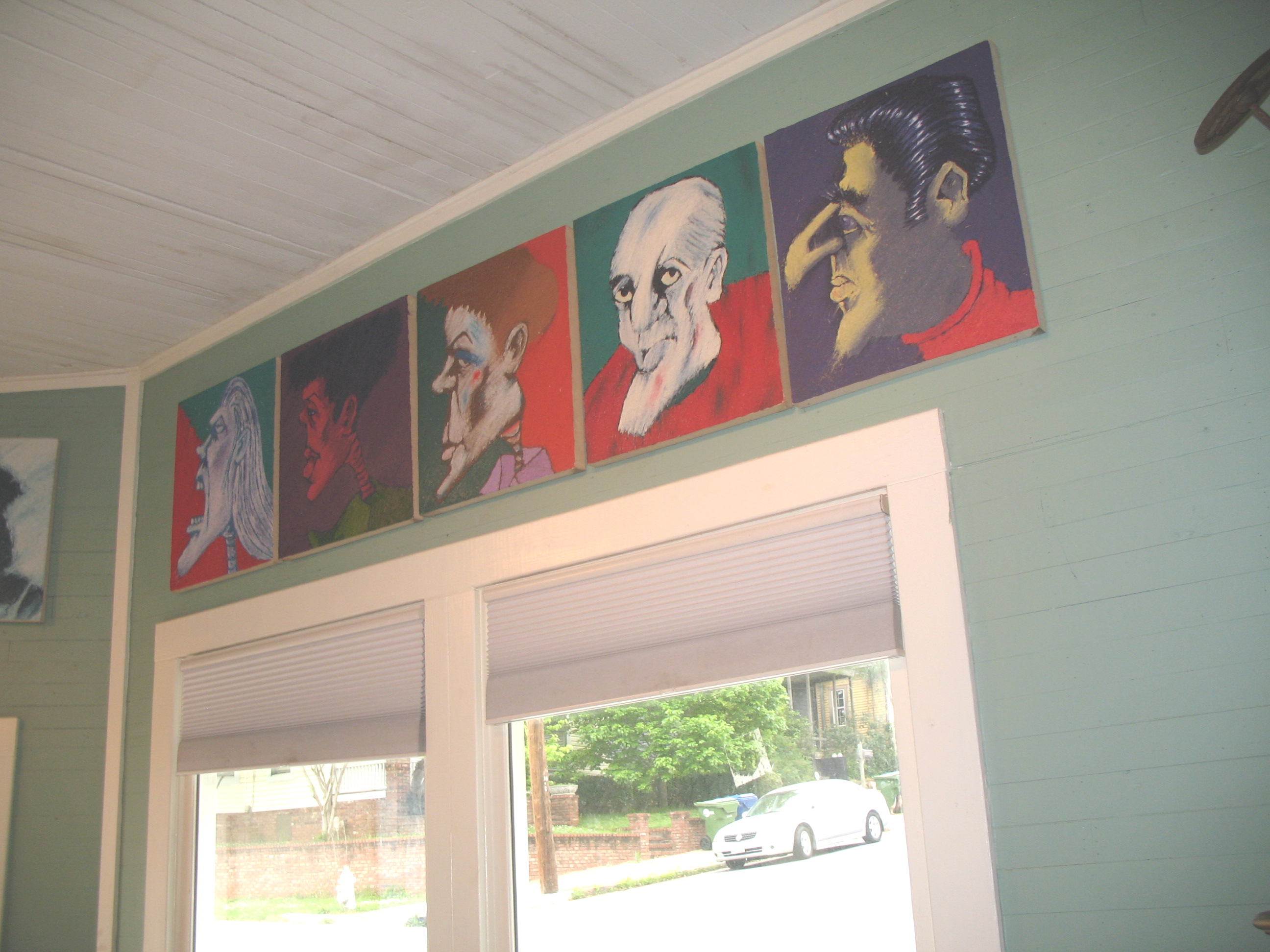 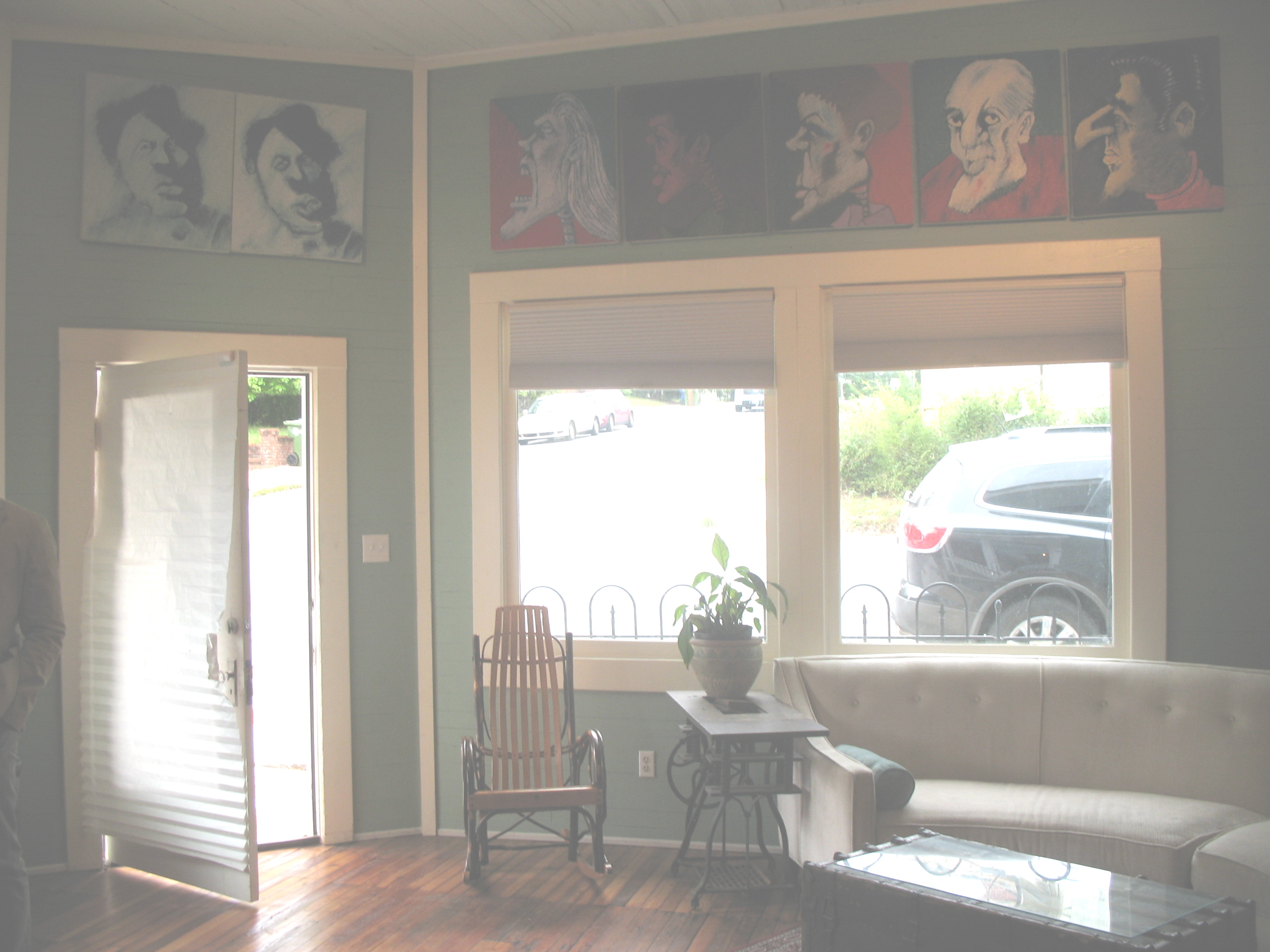 A charming space to exhibit and perform in located near Grant Park. All the paintings are
27 x 23 or 24" oil on canvas from the 1980s, the categories one-a-day, heads and single
objects. for more detail and better photos.
back to main   back to current